Written in 2010 by Bruce Norris, this Tony and Pulitzer Prize winning play was inspired by the events of Lorraine Hansberry’s A Raisin in the Sun, one of my favorite plays ever. Aside from that, I didn’t know what else to expect. I definitely didn’t think I’d be laughing as much as I did considering the subject matter. Everything about it was perfect- from the performances of the cast who each played double roles, the stage design and direction, the writing, and the insightful Q&A that followed afterwards. Clybourne Park definitely invites conversation after viewing it.

(I also ran into a Children’s Book Bank volunteer who had recognized me during our Martin Luther King, Jr. Weekend of Service session over a year ago!)

The following night, I treated myself to a talk at Mercy Corps NW Portland Action Center. They had just opened their new exhibit The Art of Sport + Play. Based on Kevin Carroll’s “Rules of the Red Rubber Ball,” it’s “a personal look at selected pieces of memorabilia gathered from his travels throughout the world” and “tells a story about the universal power of sport.”

Kevin gave a powerful, inspiring lecture. It was clear how much books and reading played an important role in his life. “Reading makes your life better very early.” Another thing he said that stood out was “Don’t talk about it, be about it!” The interactive exhibit is really worth checking out! Plus, I loved seeing how people can donate a book to go to the library and get a playground ball in exchange.

On Thursday, Erica took me on a Road Trip/Library Hop. I wrote about the library portion of the day here. While we were at Newport, we stopped by Sylvia Beach Hotel. I had planned on taking a trip there last summer but didn’t get around to going. It was the highlight of a truly wonderful day.

We were able to tour some of the rooms- including the Agatha Christie where I had wanted to stay. I loved the clues scattered about. Each of the other rooms we saw all had these wonderful little touches and a library of the writer whom they were named after. I definitely felt a creative energy in the air and I can’t wait to go back! Check out their site and you’ll fall in love! 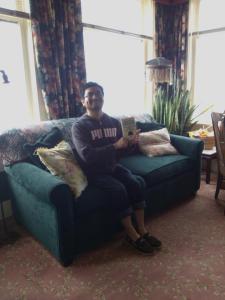 We also stopped by the Nye Beach Book House less than a minute’s walk away. I love visiting bookstores as well and was happy to add it to my list. It was a cozy place with friendly staff.

Sunday was spent with Catrina and her kids as we visited a whole bunch of places including the Portland Children’s Museum where their current exhibit was “Storyland: A Trip through Childhood Favorites.” 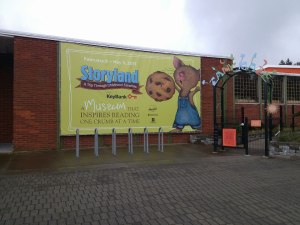 It was definitely interactive with lots of things to do. I appreciated how the whole museum encouraged storytelling and promoted early literacy! There was even a Little Free Library by the Zany Maze. 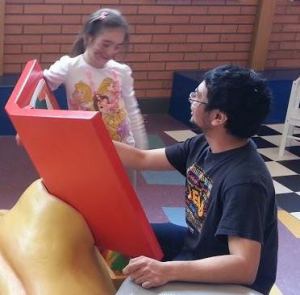 The featured books were:
-Chicka Chicka Boom Boom by Bill Martin Jr. and John Archambault
-The Snowy Day by Ezra Jack Keats
-If You Give a Mouse a Cookie by Laura Numeroff
-The Tale of Peter Rabbit by Beatrix Potter
-Where’s Spot? by Eric Hill
-Tuesday by David Wiesner
-Abuela by Arthur Dorro

It was cool that Portland Children’s Museum was also offering special offers if people donated a book (to go to the Children’s Book Bank) or showed their library card!

Of course, there was also my Bookish Birthday. I love celebratory moments that can be punctuated with books!

One thought on “A Bookish Birthday Week”